A sketch of Shah Abdul Karim Boyati's life and philosophy

The 13th show of Mohajoner Nau has been staged at the Experimental Hall of Bangladesh Shilpakala Academy. The stage performance left the audience mesmerised through out the 85-minute duration of the show. The 20 or so performers did a fantastic job of captivating the audience by singing and dancing to the live folk songs. It is a musical play based on the life of the legendary Shah Abdul Karim Boyati who has composed over 1600 Bangla baul songs.

Mohajoner Nau was staged in the round or arena theatre more commonly known as the central stage with no curtains. As a result the audience feel very close to the performers in this kind of theatre. The performers walk in and out of the stage from among the audience. The play was directed by Shakoor Majid, the famed writer of Londoni Konya, a television drama based on a Sylheti girl living in London, whom everybody wanted to marry in order to get a British Passport created a lot of controversy. Although he had written a few dramas and telefilms this was his first work for the theatre. Shakoor was inspired by Shudeep Chakrabarti, a young lecturer of the Department of Drama, University of Dhaka. Shakoor Majid’s camera followed Karim from 2003 till 2009 when he breathed his last. The tune “Payar” was used in the making of the musical drama which was often used by Baul Abdul Karim. There were about 20 songs by Abdul Karim which were partially sung by the artists trailing the life of Abdul Karim.

Shah Abdul Karim’s nephew had given Shakoor Majid a lot of information regarding his life. Karim, who belonged to the cult of bauls who believe that the human body is the seat of all truths–a vehicle for spiritual journey, was born in one of the remotest villages of the country, Ujan Dhol of Derai thana in Shunamganj. That’s why we find the use of boat and river in many of his songs. The boat is in fact a symbol of life or physical existence of a human being where the river stands for the symbol of journey. For Karim the boat was borrowed from its owner, only to be returned to him at the end of the journey. 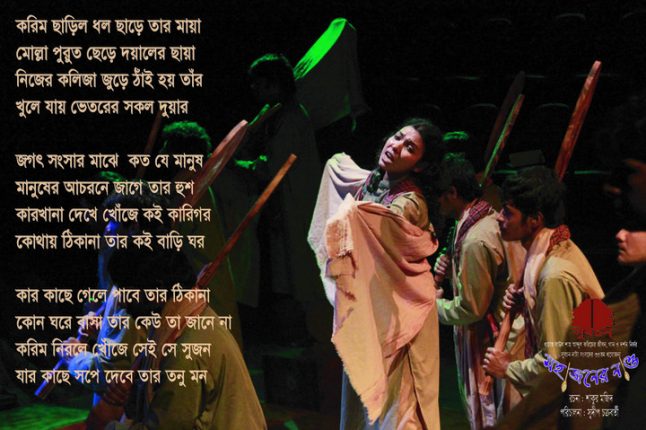 Shah Abdul Karim spent his entire life in finding the philosophy behind every human’s existence. He tried his best to get rid of the religious superstitions, racism that prevailed in his surroundings. Karim used to tend cows as a young man, who never took any Eid holidays. His passion for music got him infamous among the clerics and influential people in his village. They asked him to quit music on number of occasions. When one of his disciples died the cleric refused to bury him as he thought people who earned their livelihood by singing were living in sin. Finally Abdul Karim recited the prayers and buried the disciple all by himself.

Shakoor Majid had tried to show Karim’s philosophy with the use of the songs. The effect of light created a dreamlike effect while describing Karim’s past. The present in contrast had ordinary light, so it was very easy for the audience to travel back and forth in past and future. Even the imagery of boat with its peacock head was brilliantly constructed with a wooden dummy, the performers making the boa with long pieces of cloths. What was different about the play was that the central character was played by different artists at different episodes. The last scene where Karim passed away evoked an emotional response from the audience. It was a good production and a highly commendable play for everyone to watch.